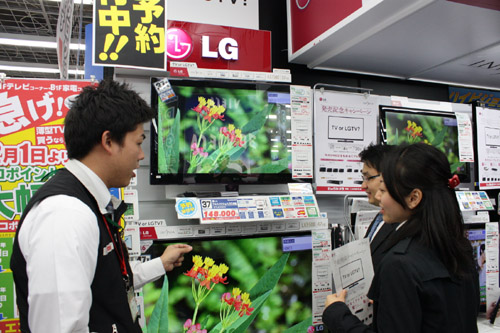 with Sights Set on Becoming Global Number One in TVs

SEOUL, Nov. 18, 2010 — LG Electronics (LG) announced a full range of LED LCD TVs to go on sale in Japan starting November 19. LG’s top-of-the-line TV models will be available in more than 60 retail stores in major cities such as Tokyo, Osaka and Nagoya.
Offering 10 LED LCD models in total, LG will introduce three premium FULL LED LCD TVs with 42-, 47- and 55-inch screens and seven edge-lit LED LCD models with screen sizes ranging from 22 to 42 inches.
“We are very excited and fortunate to be bringing our newest LED TV products to Japan where there is a greater awareness of the quality of Korean goods,” said Kyu-hong Lee, Vice President and CEO of LG Electronics Japan. “Japan is one of the toughest TV markets in the world but we feel we have the right combination of technology, marketing and price competitiveness to success here when other non-Japanese TV brands have not.”
At the top of the company’s lineup is the LX9500, a “Best of Innovation” award winner at the Consumer Electronics Show in Las Vegas. The LX9500’s slim and sleek INFINIA design is just 22.7mm thick and the extremely narrow 16mm bezel further enhances the 3D experience by drawing viewers deep into the heart of the action. Priced to compete with premium Japanese TV models, the LX9500 also boasts the very latest FULL LED backlighting technology and TruMotion 480Hz image processing, which combine to deliver gripping pictures in both 2D and 3D.
With a close eye on the needs of the Japanese market, LG has designed the entire TV range to use up to 35 percent less electricity compared with conventional LG LCD TVs. LG’s eco-friendly technology has earned its TVs a five-star energy rating in Japan.
According to research firm DisplaySearch, the LED LCD TV market in Japan is forecast to increase from 4 million units this year to 8.2 million units by 2014.
# # # 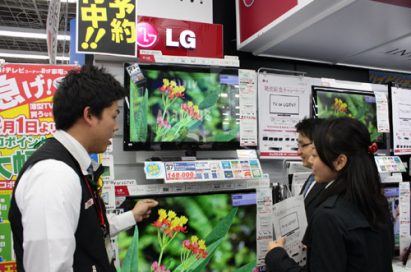