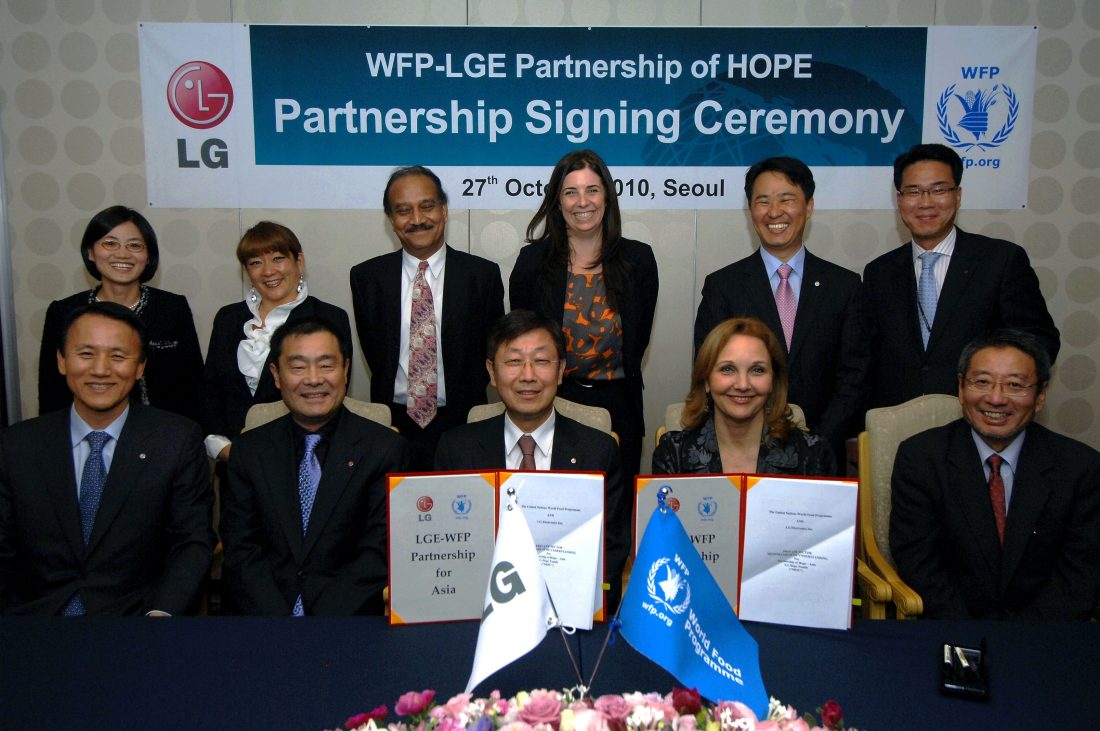 SEOUL, Oct. 31, 2010 -– LG Electronics (LG) and the United Nations World Food Programme (WFP) have this week come together in new partnership to strengthen the fight against hunger and under-nutrition in Asia.

The LG Hope Family for Asia is a three-year public-private partnership through which LG will support WFP’s programmes, in Bangladesh and Cambodia to provide sustainable solutions in the fight against hunger.

“LG believes passionately in a world free from hunger,” said Executive Vice President Young-kee Kim of LG Electronics. “Through this partnership with WFP, we are contributing to real change –- not just change for one day or one week but a sustained change -– that sees families and communities lifted permanently out of poverty.”

“The leadership being shown by LGE is an example to the world of how the private sector can be a powerful force for good in our world,” said WFP Executive Director Josette Sheeran, in Seoul for the signing of the agreement between the two organisations this past week.

The funds will be used in southern Bangladesh to target an estimated 6,000 ultra-poor families affected by seasonal flooding and climate change and provide them nutritional food, through food-for-work projects designed to raise homesteads above floodwater levels, and improve irrigation and agricultural productivity.

In Cambodia, LG’s support will help raise roads above floodwater levels, ensuring vital links to markets and schools for another 6,000 families. It will also stimulate rice cultivation through improved water management and fund the construction of small-scale fish farms which will improve food security, dietary diversity and household income.

“Asia is one of the most vulnerable areas threatened by climate change,” said Mr. Woody Nam, President of LG Electronics Asia. “Climatic changes will put people at risk of hunger and malnutrition and will disproportionately impact those communities with the least resources and capacities to adapt and respond.”

LG’s Partnership of Hope for Asia builds on LG Hope Village in Ethiopia and LG Hope School in Kenya in which approximately 30,000 people annually will receive benefits between 2009 and 2011.

About WFP
WFP is the world’s largest humanitarian agency fighting hunger worldwide. Each year, on average, WFP feeds more than 90 million people in more than 70 countries. WFP now provides RSS feeds to help journalists keep up with the latest press releases, videos and photos as they are published on WFP.org. For more details see: http://www.wfp.org/rss 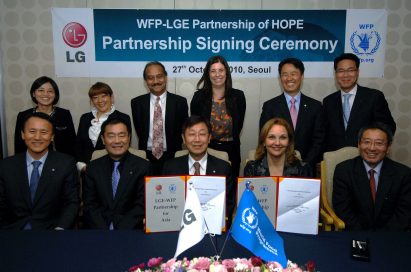