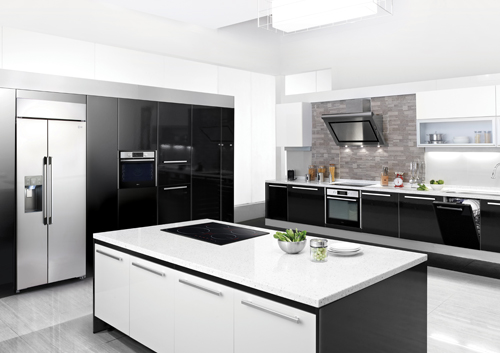 LG’s proprietary built-in technology helps create an eco-friendly kitchen by generating energy savings across the entire LG Studio range. EasyClean™ is a self-cleaning function offered in LG’s built-in electric ovens that delivers a clean oven interior in as little as 20 minutes. Without the need for harsh chemicals and scrubbing, EasyClean™ transforms cleaning into three simple steps: spray the interior with water, run the 20 minute EasyClean™ cycle with the simple touch of a button, wipe down the enamel-coated interior when the cycle is complete.

LG Built-in Dishwasher delivers sparkling results using TrueSteam™ technology which is activated when the unit’s Steam Power mode is engaged. TrueSteam™ discharges high-temperature steam particles ― 1/1600 the size of normal water droplets ― from precisely aimed pressure nozzles so that food particles are dispersed and dishes are left immaculately clean. Steam temperature and pressure are managed by the dishwasher’s built-in steam generator, which is gentle yet powerful enough to remove tough stains such as lipstick. The revolutionary TrueSteam-equipped LG Built-in Dishwasher removes the inconvenience of pre-washing dishes by hand. And LG Built-in Dishwasher’s amazing energy efficiency (A++) is made possible by LG’s unique Inverter Direct Drive. This advanced motor technology optimizes the power needed for each load by directly and more efficiently transferring energy from the motor to the water spray system.

The LG Built-in Electric Hob features illuminated visual indicators, allowing for the active plates to be easily identified, the Built-in Hood offers electronic touch control with features such as an off-timer, filter saturation indicator and the self-timing intensive mode for maximum ease-of-use.

“Today’s customers want their kitchens to be functional and visually appealing at the same time,” said Seong-jin Jo, president and CEO of the LG Electronics Home Appliance Company. “LG Studio offers the best of both, fusing the understated elegance of European design with the power, precision and efficiency of LG’s industry leading technologies. Our built-in package is ideal for those who enjoy the culinary arts, interior décor and, of course, convenience.” 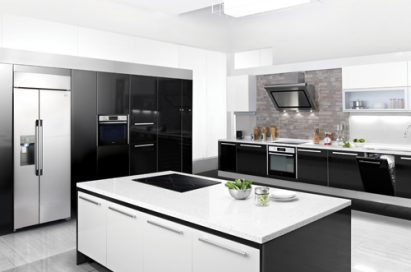