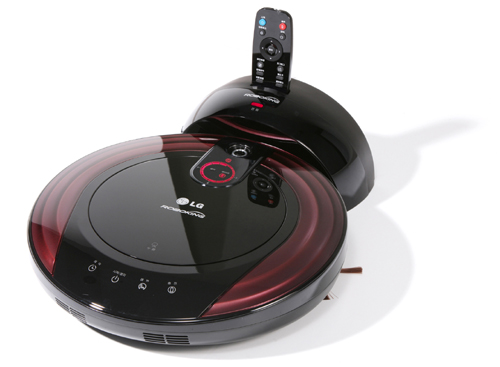 SEOUL, Jun. 23 2011 -– LG Electronics’ (LG) HOM-BOT Smart Vacuum Cleaning Robot was recognized as a finalist at the 7th Annual Invention and Entrepreneurship Award in Robotics and Automation (IERA). Between the IERA recognition and a red dot design award, the HOM-BOT is the only robotic cleaner in the world to be honored by both prestigious organizations.
A co-sponsored activity between the International Federation of Robotics and the IEEE Robotics and Automation Society, the purpose of the IERA award is to highlight and honor the achievements of inventors with value creating ideas and entrepreneurs who propel those ideas into world-class products. The IERA underlines the determination of both the International Federation of Robotics and the IEEE Robotics and Automation Society to promote stronger collaboration between robotics science and the robotics industry.
“We’re honored by this recognition because the HOM-BOT is all about using technology to make housework less inconvenient,” said Young-ha Lee, President and CEO of LG Electronics Home Appliance Company. “The right balance of technology and functionality is what makes LG products unique and HOM-BOT is a shining example.”
The HOM-BOT boasts an impressive array of cutting-edge features. The Dual Eye Camera Sensor is the first such device to be utilized in a vacuum cleaner and uses one lens on the top fascia and one on the bottom to provide more comprehensive visual data. The upper camera is also tasked with simultaneously mapping and remembering floor plans, while the lower camera is equipped with an Optical Flow Sensor that captures a myriad of surface images per second, providing distance information and plotting paths for the HOM-BOT to follow.
Ultrasonic and infrared sensors identify obstacles and work to prevent the redundant bump-and-retreat action. Failsafe systems are built in, so in the event that the HOMBOT does run into an obstacle, the accelerometer and gyro sensor allow the cleaner to react accordingly. The result of this compilation of sensors and programming is a vacuum that avoids the pitfalls rival systems often suffer from. Moreover, the HOM-BOT is pleasingly quiet, with noise levels reduced to just 60dB.
In addition to its technological achievement, HOM-BOT was named a winner of a red dot design award, one of the most prestigious in the industry. Since 1955, the Essen Design Zentrum Nordrhein Westfalen has annually selected outstanding design quality and paid official tribute to the award-winning products in an exhibition. The 2011 competition received 4,433 products from 1,700 companies, entered from 60 different countries. The official award ceremony will be held in Essen, Germany on July 4.
# # # 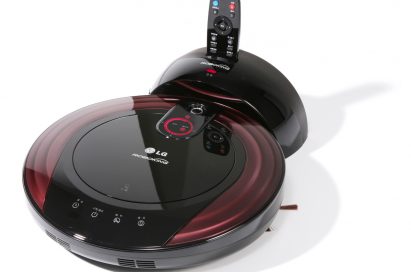 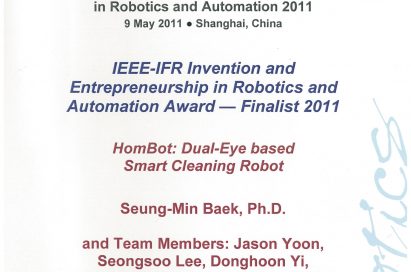