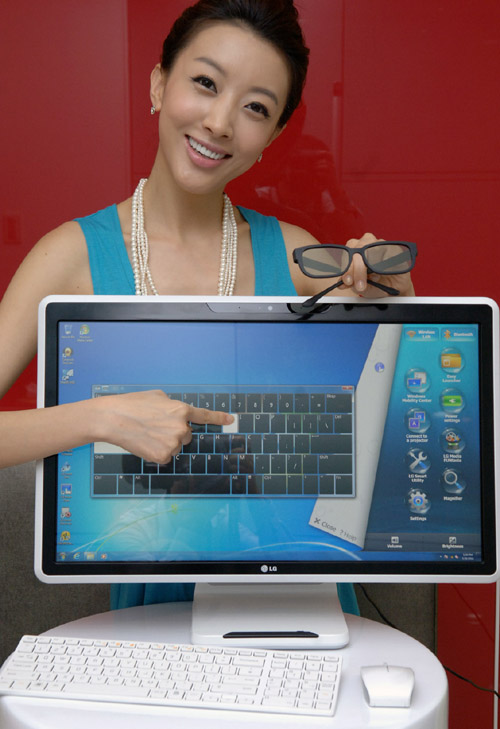 SEOUL, May. 31, 2011 –- LG Electronics (LG) will be unveiling its first all-in-one PC which will feature the innovative Film-type Patterned Retarder (FPR) display, found in its popular CINEMA 3D TVs. The LG V300, developed in partnership with Intel, will be unveiled at Computex 2011, Asia’s largest IT exhibition, in Taipei from May 31 to June 4.
The LG V300 will come with an impressive list of features including 2nd Generation Intel Core processors, 3D FPR display, In Plane Switch (IPS) screen technology that creates a stunning 178-degree viewing angle and a triple camera system for superb multitouch capability.
“The combination of the newest Intel Core processor and the FPR display in the LG V300 is going to create a new level of performance and viewing experience in a PC,” said J.J. Lee, Executive Vice President and Head of the LG Electronics PC Business Unit. “With millions of homes now using their PCs as entertainment hubs, marrying the best from the computing world with the best from the display world was the next natural
step in the evolution of the PC.”
“2nd Generation Intel Core processor paves the way for great all-in-one systems like LG Electronics new V300. ” said Mooly Eden, Vice President and General Manager of Intel PC Client Group. “The V300 combines LG Electronics’ display technology with 2nd Generation Intel Core’s great performance and built-in visuals to create an awesome PC experience. ”
Better 3D, No Discomfort
The 23-inch 3D Full HD LED monitor on the LG V300 offers vivid and crisp 3D images with less crosstalk and flicker. And because FPR does not require glasses to sync with an emitter, heavy shutter-type glasses are a thing of the past. Instead, the LG V300 comes with two sets of lightweight polarized glasses for a more comfortable and enjoyable 3D experience. Furthermore, the viewing experience on previous 3D displays was negatively affected by non-perpendicular viewing angles. This problem has largely been eliminated with the LG V300’s IPS technology, which allows for an impressive 178-degree viewing angle. The system operates a Color Shift configuration that accurately renders colors and images for viewers not directly facing the screen.
Minimalism Is In
LG’s engineering team reduced the thickness of the LG V300’s active display to a mere 44.65mm, which is up to 65 percent slimmer than other leading models. This focus on reducing unnecessary bulk was then incorporated into LG’s concept of minimalism. With a wireless keyboard and mouse, the design requires only a single power cable, eliminating clutter and tangled cords. The end effect is a sleek, clean appearance that
fits elegantly into any interior décor.
An Enhanced Multi-touch Experience with a Triple Camera System
With three individual camera sensors to provide a more accurate multi-touch functionality, LG’s new PC brings a higher level of precision to the touchscreen experience. The user interface has also been optimized to be as intuitive as possible, and the interface itself is supported with easy-to-use applications. The final result is a smooth yet sophisticated multi-touch interaction between the LG V300 and the user, free from ghosting and glitches.
The LG V300 also includes full support for Digital Living Network Alliance (DLNA) to enable sharing of data between devices as well as Intel’s Wireless Display, also known as ‘Wi-Di’ to wirelessly stream content to a TV. LG V300 will launch in Korea in July followed by markets in Europe, Middle East and
Asia.
Specifications and Features: LG V300 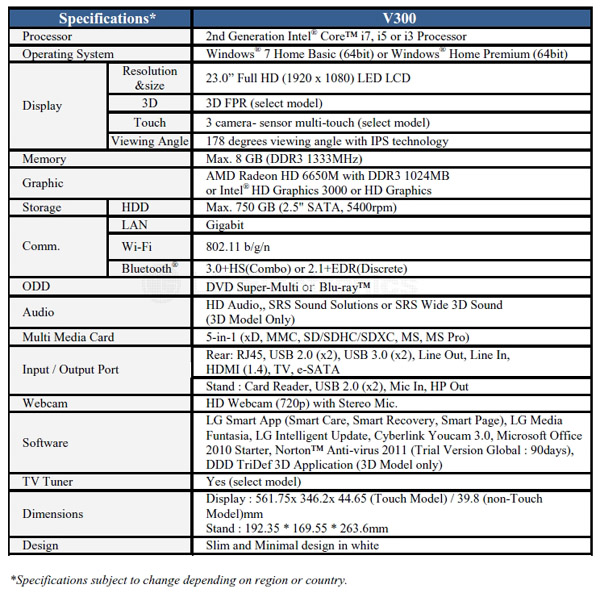 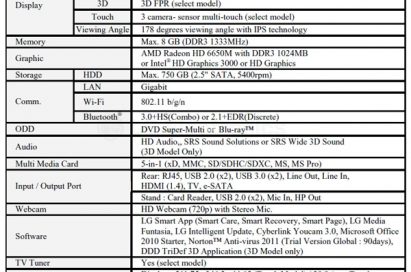 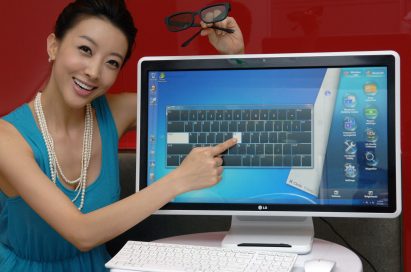 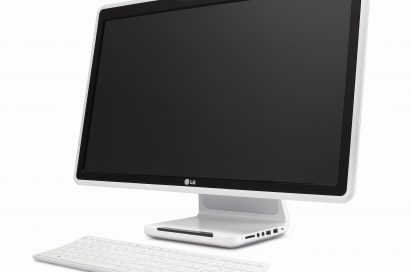 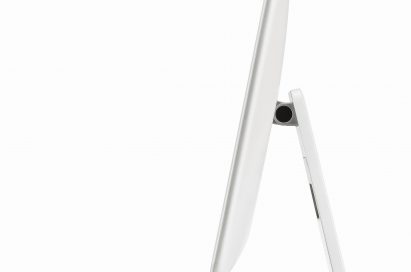 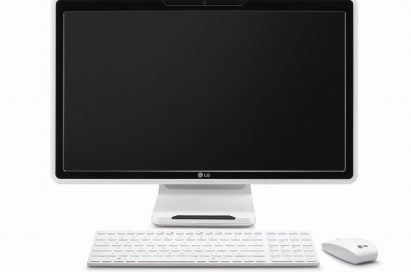