The LW9500 and LW7700 boast improved localized dimming in both 2D and 3D with their Micro Pixel Control. By manipulating individual LED blocks, Micro Pixel Control adds even greater range and life to colors, from the deepest, darkest blacks to the most natural colors. The LW9500 is further enhanced by LG’s TruMotion 480Hz, while the LW7700 features LG’s TruMotion 240Hz, both of which deliver super-fast processing rates for moving images making them virtually blur-free. The overall effect is a picture so smooth, sharp and realistic it’s as if the action is playing out right in viewers’ living rooms.

As LG’s picture technology continues to evolve, so does its innovative INFINIA Design. With its incredibly narrow bezel, the NANO series can complement any interior. Combining superior picture quality with an alluring design, these models deliver perfect visual harmony.

Both the LW9500 and LW7700 deliver LG’s best 3D images yet. By ensuring a more uniform distribution of light from the LED backlight panels, the NANO series illuminates the screen more effectively, for 3D pictures of superior clarity and brightness. The 55- and 60-inch class models pack in 288 local dimming blocks, while the 47-inch class model has 240 local dimming blocks.

LG’s NANO FULL LED series is expected to join an elite group of LED LCD HDTVs that have achieved THX 2D and 3D Display Certification – the industry standard for having the correct gamma, luminance, and color temperature. To earn THX 3D display certification, these models passed more than 400 laboratory tests evaluating left and right eye images for color accuracy, cross-talk, viewing angles and video processing performance. In addition to THX 3D Display Certification, this series had to pass THX certification for their superior picture quality in 2D, which must be achieved before passing THX 3D Display Certification. THX Certification ensures that consumers bring home an uncompromised HD experience with picture quality the way the director intended.  NANO FULL LED and FULL LED Slim 3D works with the use of active shutter glasses and an emitter built directly into the television.

The INFINIA NANO FULL LED series boasts a connectivity package with a variety of entertainment options, including the brand new LG SmartTV. LG SmartTV is a revolutionary and easy way to access limitless content, thousands of movies, customizable apps, videos and the best of the Web all organized in a simple to use interface. And when consumers can just point and choose selections with LG’s unique motion-controlled Magic Motion Remote control, it’s even simpler.

LG has also incorporated the Digital Living Network Alliance (DLNA) technology across all of its SmartTV-enabled HDTVs. DLNA allows consumers to access content stored on other DLNA-certified devices within the home, such as computers, making content options almost limitless.

Using NANO Lighting Technology, LG has taken its FULL LED picture and made it even more exhilarating. Whether in 2D or 3D, NANO FULL LED TV raises the bar for television viewing with pictures that are as engrossing as they are strikingly realistic. With the exceptional picture of LG’s LW9500 and LW7700, viewers can now see FULL LED in a whole new light. 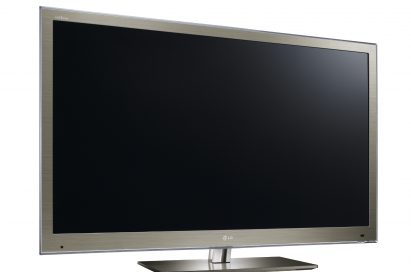