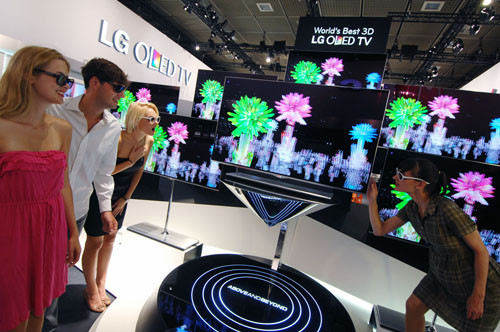 BERLIN, Aug. 30, 2012 -– LG Electronics will showcase a medley of industry-leading consumer electronics under the banner “ABOVE AND BEYOND” at this year’s IFA show in Berlin. At the center of it all is the world’s largest and slimmest 55-inch OLED TV, designed to deliver the ultimate viewing experience. LG’s booth will also showcase the latest home entertainment products including world’s first 84-inch UD (Ultra Definition) 3D TV, CINEMA 3D Smart TV, IPS (In-Plane Switching) monitors, and a huge range of audio and video products packed with market-leading CINEMA 3D technology and expanded Smart ecosystem with a vast of apps and premium 3D content.

“At IFA every year, LG delivers a new dimension of home entertainment experiences,” said Havis Kwon, President and CEO of LG Electronics Home Entertainment Company. “This year is no exception, as we introduce a wide range of more advanced 3D and Smart TV products, including one of the most anticipated next-generation displays, the OLED TV.”

CINEMA 3D Attractor
Visitors to LG’s booth will first be mesmerized by a spectacular CINEMA 3D Attractor that showcases the best technology that LG has to offer. From there, they will get their first introduction to LG’s OLED TV and impressive array of 3D products. With 122 3D screens covering the walls of the booth and completely surrounding the entrance, the zone will bring the most immersive 3D experience to life.
OLED TV
The OLED TV zone will invite visitors to experience the most advanced display on the market, LG’s world’s largest and slimmest 55-inch OLED TV, which delivers truly uncompromising picture quality thanks to its 4 Color Pixel and infinite contrast from self-lighting pixels. The 4 Color Pixel design adds a white sub-pixel to the three primaries (WRGB), providing realistic colors from any viewing angle. In addition, the Color Refiner enhances color precision and consistency, hallmarks of LG’s OLED technology. Its 4mm-Paper Slim panel and use of strong Carbon Fiber-Reinforced Plastic (CFRP) give the OLED TV a sleek, minimal exterior and further help deliver a truly immersive ultimate viewing experience.

CINEMA 3D Smart TV
Visitors will get the opportunity to get up close and personal with the full line-up of CINEMA 3D Smart TVs, which have received positive reviews from awards and a number of leading IT and consumer magazines from all over the world. Earlier in August, LG’s CINEMA 3D Smart TV (Model 55LM960V) won the European Smart TV Award at EISA 2012 Awards, one of the most coveted awards by Smart TV makers. More accolades include a 5-star Editor’s Choice Award from CNET, a Best Buy Award from Which?, a Test Winner Award from HiFi Test and Audio Video Foto-Bild, alongside many more.

IPS Monitors and PCs
LG will highlight a wide range of IPS monitors at IFA 2012 that are perfect for both work and play. Leading the line-up will be LG’s EA93 and EA83 IPS monitors that are designed for graphics-intensive applications and multitasking. The EA93 boasts a 21:9 cinematic screen, perfect for recreating a true entertainment experience at home. The EA83 includes a Wide Quad High Definition (WQHD) display with a resolution of 2560×1440 pixels matched with one of the widest color spectrums available for the discerning professional. The IPS technology in the EA93 and EA83 monitors are able to produce more lifelike images at practically any viewing angle, while reducing eye fatigue. What’s more, LG will showcase the 27-inch TM2792 Personal Smart TV with CINEMA 3D technology and the Z350 Ultrabook boasting a 9-second boot time.

Audio, Video Products and Smart Accessories
LG will demonstrate its 3D and smart capabilities by showcasing its most complete 3D Home Theater System, the BH9520TW, which features a 360-degree reflector and multidirectional 3D speaker set. Together these produce a CINEMA 3D Sound that truly enhances the 3D home entertainment experience. The 9.1 3D Speakers are capable of delivering an auditory experience similar to a state-of-the art movie theater. The BH9520TW is also equipped with smart features including LG Apps, powerful VOD service, and Wi-Fi Direct, which allows users to easily share content between digital devices.

The ND8520, LG’s latest docking speaker for iPod, iPhone, or iPad, delivers a unique design along with excellent sound. It is compatible with Airplay, enabling users to get

the most out of their iTunes library. Apple’s Airplay enables the user to share their extensive music collection throughout the home via Wi-Fi. Its compact size belies its impressive capabilities: the diminutive unit features a powerful built-in subwoofer, ensuring deep, crisp reproduction of even the deepest notes.

3D Video Wall
Visitors will be introduced to LG’s world’s first 3D Video Wall that features FPR 3D, the same flicker-free technology found in LG CINEMA 3D Smart TVs. The WV70MD features the world’s narrowest bezel at just 5.3mm. With such a slim bezel, multiple WV70MD displays can be easily combined to provide a large single-screen display. The 3D Video Wall offers crystal-clear images without distortion or color inconsistencies, thanks to the IPS panels which also guarantee a wide viewing angle, perfect for accommodating a large group of people.

Last but not least, LG will also be unveiling a new version of its revolutionary Mouse Scanner, which takes all the pain out of document scanning.

To see more of LG’s award-winning range of Home Entertainment products at IFA before opening day, please attend LG Media Day on August 30 at 15:00 or 16:00 in Hall 11.2 of Messe Berlin.