LG ELECTRONICS HONORED BY U.S EPA AS 2015 ENERGY STAR PARTNER OF THE YEAR 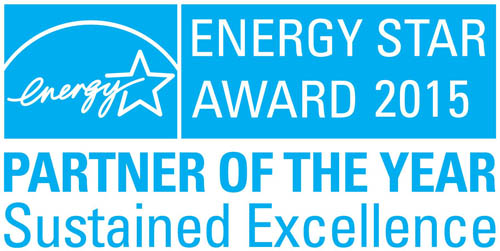 SEOUL, Apr. 7, 2015 — LG Electronics (LG) has been recognized by the U.S. Environmental Protection Agency (EPA) with the 2015 ENERGY STAR Partner of the Year-Sustained Excellence Award for continued leadership in protecting the environment through energy efficient consumer electronics and home appliance products. LG also earned the 2015 ENERGY STAR Partner of the Year-Climate Communications Award for efforts to raise consumers’ awareness of the impact of climate change.

“LG values our partnership with ENERGY STAR, and it’s exciting to see the positive impact LG is making with American consumers,” said William Cho, President and CEO of LG Electronics USA. “We’re helping consumers experience Innovation for a Better Life by creating products that deliver energy savings without sacrificing performance or style. We are committed, now more than ever, to continuing our work to help reduce greenhouse gas emissions and protect the environment.”

Applauding LG for its accomplishments, EPA Administrator Gina McCarthy said, “Through their sustained participation with ENERGY STAR, LG is helping Americans save money, save energy, and do their part to reduce our nation’s greenhouse gas emissions that fuel climate change. I applaud LG for earning EPA’s highest ENERGY STAR honor, the 2015 Partner of the Year-Sustained Excellence Award, demonstrating a strong commitment to energy efficiency and to preserving a healthy planet for future generations.”

Recognized by the EPA as ENERGY STAR Partner of the Year for the past four years, LG is committed to developing the most innovative and energy-efficient products that provide consumers with superior performance while achieving significant energy savings and lessening the impact on the planet, Cho said.

LG expanded its efforts in 2014 to further promote the ENERGY STAR brand. American consumers purchased more than 1 million LG products that were awarded the “ENERGY STAR Most Efficient 2014” distinction, which helps consumers easily identify the most efficient products among those that have earned the ENERGY STAR label.

Expanding its efforts to change consumer behaviors in 2014, LG generated millions of consumer impressions with its stepped-up public education and community outreach campaigns about the impact of climate change.

Chief among them was LG’s industry-leading support of EPA’s first-ever community service-themed ENERGY STAR Change the World Tour, a nationwide tour bringing public and private organizations together to make a difference in people’s lives through community service focused on energy efficiency. As a major technology provider for the tour, LG supported energy-saving upgrades at multiple tour stops, including installation of an ENERGY STAR Most Efficient LG 65-inch class HDTV and ENERGY STAR certified commercial clothes washers for homeless veterans at the U.S. Vets facility in Phoenix.

Among other 2014 initiatives, LG collected more than 1,400 “Change the World-Start with ENERGY STAR” Pledges and reached more than 20,000 fans with ENERGY STAR messaging at the NCAA® Final Four® in Atlanta, leveraging LG’s role as Official NCAA Corporate Partner.

The 2015 ENERGY STAR Partner of the Year-Sustained Excellence Awards are bestowed upon organizations to recognize their contributions to reducing greenhouse gas emissions through superior energy efficiency achievements.

According to the EPA, these winners have reduced greenhouse gas emissions by setting and achieving aggressive goals, and employing innovative energy efficiency approaches. These awards recognize ongoing leadership across the ENERGY STAR program, including energy-efficient products, services, new homes, and buildings in the commercial, industrial, and public sectors.