The demonstrations are made possible through a cooperative effort with Harris Corporation, which has developed the necessary MDTV transmission equipment, and local DTV broadcasters KLAS-TV, 8 News NOW in Las Vegas, and Vegas PBS Channel 10.  Roundbox, a leading mobile software provider, is providing non-real time data services that power the Smartphone coupon application, as well as the Electronic Services Guide (ESG) for both innovative applications for ATSC MDTV.

The seven-inch barrier-type LCD display shows lifelike 3D images that appear to jump right off the screen.  With its built-in antenna, the device also receives conventional 2D 416×240 resolution MDTV broadcasts and scales images up to 800×480 resolution. It also functions as an attractive digital photo frame when not being used as a Mobile DTV receiver.

Electronic Coupons from your Smartphone
Non-real time services such as electronic couponing and video-on-demand are made possible by the versatile ATSC Mobile Digital TV standard now being deployed by broadcasters throughout the U.S.  KLAS-TV 8 (RF channel 7) is transmitting digital coupons for electronics stores and restaurants during CES.

The smartphone prototype is LG’s first full-touch CDMA device with built-in Mobile DTV circuitry.  Running the Android 2.2 (Froyo) operating system and LG’s second-generation MDTV chip, the fully-featured Smartphone includes a 3.2” HVGA screen, 3 megapixel camera, GPS and Wi-Fi capability, and other features such as an accelerometer, digital compass, and ability to play back a variety of audio and video codecs.

Chips Available for Portable Device Manufacturers
Co-developer of the technology at the heart of the ATSC Mobile DTV Standard, LG Electronics is producing the critical component for Mobile DTV reception –- the LG2161R single chip design that includes both the tuner and demodulator in a tiny seven-by-seven millimeter square package.  This key component of mobile DTV receivers already can be found in a variety of new products being introduced by various manufacturers this year for mobile DTV, from laptop USB accessory receivers to prototype netbooks with integrated mobile DTV tuners.

Standardized by the Advanced Television Systems Committee and formally adopted as the ATSC Mobile DTV Standard, the new technology allows broadcasters to use a portion of the existing 19.4 Megabit-per-second DTV channel capacity to transmit data with extremely robust characteristics suitable for mobile, pedestrian and handheld applications.  The mobile DTV signal is also compatible with 8-VSB DTV, which was also developed by Zenith, LG’s U.S. research and development lab. 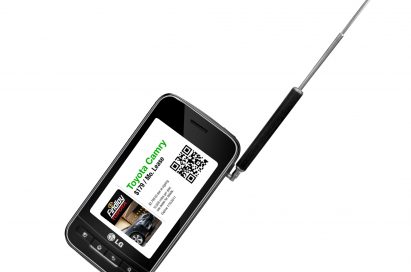