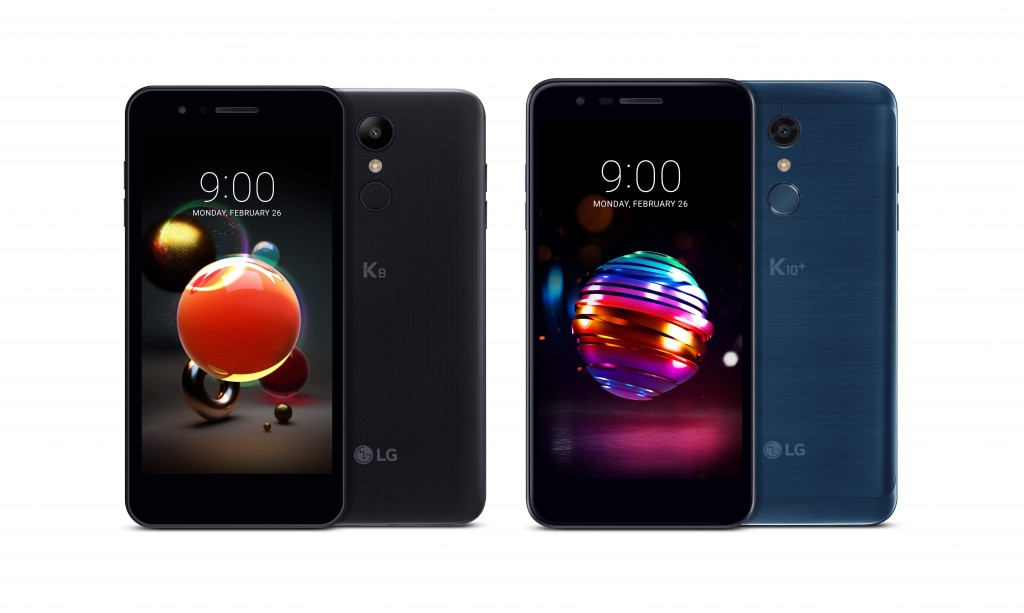 SEOUL, Feb. 22, 2018 — LG Electronics (LG) will unveil the 2018 edition of its popular K8 and K10 mass-tier smartphones at MWC 2018, enhanced with even more premium features rivaling those of premium flagships. Both models will roll out globally in key regions such as Europe, Asia, Latin America and the Middle East.

With a host of advanced camera features such as high speed auto focus and noise reduction for better low-light photography, the new K Series continues to deliver exceptional products to customers at exceptional prices. Both the K8 and K10 carry over the handsome glossy pebble identity that has been a key element of the K Series’ identity, complemented by its 2.5D Arc Glass design for a modern, seamless look that ages well with time. Both phones will be available in three new, striking colors for 2018: Aurora Black, Moroccan Blue, and Terra Gold.

The classy metallic design of the LG K10 with its metal U-frame not only looks sleek, but it is also packed with premium features not normally found in its price range. The K10 is equipped with the advanced 13MP rear camera technology found in the flagship LG G6 and a high resolution 8MP front camera that supports Bokeh when shooting selfies. With the K10, shutterbugs won’t miss any great photo opportunities with Phase Detection Auto Focus (PDAF) which is 23 percent faster than traditional auto focus. And the new Smart Rear Key not only unlocks the phone with a fingerprint, it also triggers Quick Shutter for faster photos and Quick Capture for easy screen shots.

The updated LG K8 delivers more advanced camera UX features for 2018 and low-light photography has been improved from the previous generation K8 with even brighter, clearer images. Favorite features such as Auto Shot, Gesture Shot, Flash for Selfie and Quick Share are carried over to the new K8 by popular demand.

Clearer photographs in dim environments is made possible in both the K8 and K10 with the new Low Light Noise Reduction feature. Combined with High Dynamic Range (HDR), photos come out sharper with more luminosity and contrast levels.

Taking group photos with friends or family is easier than ever thanks to the new Timer Helper feature. No longer is it necessary to guess how many seconds until the timer triggers the shutter. With Timer Helper, the K8 and K10 will help keep count using the flash as a visual aid so friends and family can be in the exact position at the right time.

Another new feature of the K Series camera is Flash Jump Shot, which snaps a photo every three seconds (up to 20 photos) and stitches the images together into a fun GIF for easy sharing. Flash Jump Shot is available on both the K8 and K10 and can be used with either the front or rear cameras.

“LG’s 2018 K Series range of smartphones is focused on delivering even more value to consumers looking for the right device that fits their lifestyle and needs,” said Ha Jeung-uk, senior vice president and business unit leader for LG Electronics Mobile Communications Company. “We’re confident we can capture the hearts and minds of consumers in the fast-moving market with our smartphone camera technology and other convenient features.”

* Product name, specifications and features may vary depending on the particular market.